Expedition to the Genex Tower

‘Krist na biciklu! Što je to??’ you might exclaim in Serbo-Croat, as you pass one of the most bizarre high-rises ever, whizzing by on the motorway from Nikola Tesla Airport into Belgrade. Serbians, of course, will already know the Genex Tower, so are unlikely to exclaim anything, but for the rest of us, the first glimpse of the bizarre double skyscraper, with a B-movie sci-fi rotunda perched on top, is a visual gob-smacker. What on Earth is it? And is it one of the ugliest buildings in the world, or a mad masterpiece? I was in town for Belgrade Design Week and outside the conference, I had to check it out. I was not disappointed.

Distant echoes of London and Yugoslavia

The Genex Tower is often compared to the Trellick Tower in London, designed by Erno Goldfinger. Both are examples of Brutalism, a style that, from the 1960s, revived concrete to give buildings a massive solidity and abstracted geometric form, in contrast to the lightness and rectilinearity of steel and glass in mainstream Modernism. Genex and Trellick both are essentially concrete slabs that have placed their service towers- lifts, stairs, pipes etc- outside the main blocks, and both have strange structures on top. The Trellick Tower was completed eight years earlier in 1972, so the London tower very likely inspired Serbian architect Mihjlo Mitrović.

But Mitrović went a lot further on the Genex Tower- the gap rising all the way up the structure is not between service and main tower, but two entirely separate skyscrapers- a 30 storey residential block and a shorter 26-storey office tower, each with cylindrical service towers either side, and attached rather than separated. At the Trellick, a distinctive cantilevered head at the top of its service tower contains a boiler room. The Genex tower is topped by a rotunda mounted on one of the office tower’s two service shafts, just above a bridge which connects to the residential block. This rotunda once contained a revolving restaurant, also with roots in London- the GPO (now BT) Tower opened the first high-rise revolving restaurant in 1965. Incidentally, the skyline rotunda as a skyscraper signature element became so popular in China in the 1990s, it was almost a local vernacular in cities like Shanghai and Shenzhen.

At 115m to the top of the rotunda, the Genex Tower was Serbia’s tallest skyscraper. The architectural height is now equalled by the Ušće Tower, which was remodelled and made taller after being trashed by NATO bombing in 1999. A radio mast mounted on the Ušće takes it to 141m, higher than the Genex mobile network mast which reaches around 125m.

The Genex Tower has nothing to do with Generation X, but there is a theory that it has masonic connections. It was built for the Genex conglomerate, ex-Yugoslavia’s biggest company, dealing in petrochemicals, raw materials and construction. When Yugoslavia broke up in 1990, Genex accounted for a tenth of the entire country’s trade. By 2007 it was a ghost of its former self, and five directors were arrested on corruption charges in a confusing case steeped in the mixture of power, privatisation and politics of the time. The Genex website hasn’t been updated since 2008. (Any clarification on this would be gladly received!)

The tower is also known as the Western Gate, but the Genex name remains. Nowadays, it is covered in adverts. Zepter, a global luxury-goods conglomerate, have mounted their name in letters on the residential block’s roof, and the office block has banners for other companies hanging across its facades. Those banners don’t break the height record of 230m set in 2003 at the 2IFC tower in Hong Kong, but even at about a quarter as high, they are truly huge.

Expedition to the Genex Tower

With writer/photographer Kristina Rapacki, I set off on a baking June day on a mission to reach the Genex Tower. We approached from the east, through Novi Beograd, the new town of postwar housing set in a grid of wide avenues on the other side of the Sava river from old Belgrade. We turned off strangely sleepy Boulevar Zorana Dindica into Omladinskih Brigada street, which defines the edge of Blok 33, a zone solid with housing. Suddenly, a leafy lane cuts through it, revealing… yes, the tower in all its magnificent strangeness!

Step through to the Pizzeria Tavolini. Photo © Kristina Rapacki 2012

At the end of the lane, a wall. Pizzeria Tavolino written in cheerful letters in the Italian colours lures you up a small spiral staircase in it that leads to a podium level. This is the base of the Genex Tower, paved in warm red brick like London’s Barbican, but overgrown and deserted. The pizzeria, huddling in a concrete arch below the facade of flats dotted with air-conditioning units, is shut. The gap between the towers leads to a vast big red-brick plaza. An arc of amphitheatre steps high above an empty round blue pool where children must once have splashed about. Every brick in the steps is tagged with graffiti, and at the top, someone has felt-tipped a cartoon where Jack and Yumi talk about high heels and strawberries. 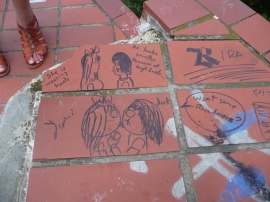 We entered the lobby of the office tower, a space where sunlight filters through dusty tinted glass. The receptionist was friendly, but no, there was no access to the top. Below the residential tower, an arcade has been painted with folk motifs and Cyrillic lettering. The tiny Apulja Mini-market is open and stacked high with snacks and drinks. There is life in this hard concrete world.

The Genex Tower is where the heroic socialist ideal of mass modular housing and open spaces, based on the concepts of Modernist architect master le Corbusier, combined with Yugoslavia’s economic muscle. The result was then a landmark structure fit for the people and simultaneously a symbol of the country’s commercial aspirations. No other Yugoslav structure conjured up the rush to modernity with the scale and eccentricity of the Genex Tower. That was all a long time ago, and now the place suggests a monument to a lost civilisation. Struggling contemporary Serbia has turned its back on it. But if the Genex Tower could sing, Elton John’s I’m Still Standing would surely soar triumphantly across Belgrade. It may be decrepit, but through sheer chutzpah, it stands stronger than it ever did, perhaps the most fantastic example of Brutalist high-rise anywhere in the world.

I am a London-based writer interested in art, architecture, the future and more. I am the author of three non-fiction books. Published articles online appear on www.herbertwright.co.uk.
View all posts by herbertwright →
This entry was posted in Architecture, Skyscrapers and tagged Belgrade, Brutalism, Genex, Genex Tower, Mihjlo Mitrović, Novi Beograd, revolving restaurant, Serbia, Trellick Tower, Yugoslavia. Bookmark the permalink.

12 Responses to Expedition to the Genex Tower