My new business card- London skyline with no Superman!

‘What a cheapskate’ people would not say. But I could read that unspoken thought when I presented my old business card. It wasn’t the only reaction- sometimes, after a moment of puzzlement, enlightenment would surface, and they may even say something like ‘cool idea!’ That big idea was a low-carbon business card. It was basically my details repeated in Word and printed on any old printer I was near, using the blank sides of A4 sheets that had had another life already, preferably with some colourful imagery. I’d cut the business cards with scissors and every one carried the message: Printed on used paper to save carbon costs.

But the idea was wearing as thin as the used paper’s gsm. When I handed them out in far-flung places like Dubai or Seoul, it felt crazy to have saved a few milligrams of carbon after I’d burnt tonnes of it jetting there to hand the card over. And it wasn’t even a business card- more a business scrap of paper. It was time to upgrade. Patrick Myles, the art director on Blueprint magazine (to which I contribute) had already suggested a rarely-used font for it, called Sophie- neutral like Helvetica, but suggesting a hint of Art Deco. All I needed was a distinctive graphical element to give the card some extra action.

In February, Blueprint editor Vicky Richardson moved on to become Director of Architecture, Design and Fashion at the British Council, and writers were asked to create an artwork for a leaving present book. Quite a challenge for me- I’m not a graphic artist or designer! But I remembered the first conversation I had had with Vicky, about Richard ‘Colonel’ Seifert, the post-war architect who changed the London skyline with expressive skyscrapers like Centre Point and Tower 42. What would he make of this century’s ‘trophy’ structures on the London skyline? Burning rubber- an eraser’s rubber, that is- I managed to sketch a selection of London’s high new icons, and imagined the Colonel’s reaction to them. He’d probably wonder what happened to a couple of his own best, demolished in the recent redevelopment frenzy, and ask after them ever so politely. That’s him out with his legendary pipe, but I wish I’d made his neck thinner.

Later, I thought, why not use the drawing on the new business card? Seifert had to go and I added the ArcelorMittal Orbit. I rediscovered ancient montage techniques to do this, like cut-and-paste from when scissors did the cutting. Patrick produced a brilliant choice of designs but was dubious that the phone number could start simply with +44. I insisted that those messy post-country-code (0)s are sooo twentieth century.

And that’s the story of my new business card. Not so much a tall story as a story of tall, if a story at all. The skyline icons- all now under construction or already built- are joined by a few figures that relate to them or to London. An American friend thought it was Superman aloft on the right. Wrong! Can you identify all the elements? 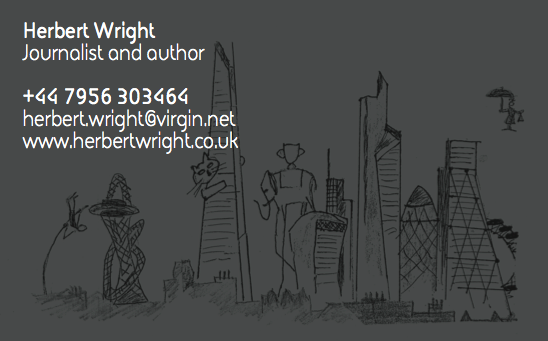 Now, if anyone wants a graphic for a card about say the latest Shanghai or Chicago skyline- my rates are flexible and my details are on the card 😉

I am a London-based writer interested in art, architecture, the future and more. I am the author of three non-fiction books. Published articles online appear on www.herbertwright.co.uk.
View all posts by herbertwright →
This entry was posted in London, Skyscrapers, Uncategorized and tagged Blueprint magazine, business card, London skyline, Patrick Myles, Richard Seifert, Sophie font, trophy buildings. Bookmark the permalink.